I love pincushions, all kinds and I have a bunch all around my sewing studio.  I first saw a version of these pincushions at Quiltcon 2015.  I was in Carolyn Friedlander’s class and behind me on a table sat a cute hexie pincushion.  I found out later it belonged to Nicole Daksiewicz from Modern Handcraft.  (She has some amazing hexagon quilt projects, check them out on her blog!) I discovered that she had a Hexie Pincushion tutorial and I wanted to make one for myself.  She used a die cutting machine to cut out all those cute 1/2 inch hexies.  I bought a bunch of wool felt and decided I would cut them out by hand.  Fast forward to December 2015 and my hubbie gifted me a Die cutting machine and that little 1/2 inch hexie die. I decided to make some of those pincushions inspired by Nicole but I added my own twist.  Here is how I made it.

I had several colors of wool felt and I ran them through the die cutting machine.  I used a muffin tin to organize all of the colors of hexies.

I cut a 6 inch strip of a linen blend.

I folded the fabric in half with the fold at the bottom.  Then I used a 60 degree triangle and positioned it so that the  top and sides measured 3 1/2 “.  This is an old Kay Wood ruler that I had.  I am thinking I really need to update some of my rulers, but this one still worked.

When you open up the fabric, you have a nice large hexie shape.  I fold it to mark the center and then iron out the fold lines.

Then, using some fabric glue stick, I arrange the hexies in a sort of circle shape.

Once the shapes are all arranged, I get a piece of scrap batting and start to quilt.

First you stitch through the center of each little hexie starting at the edge of the big hexie.  I like to use a large stitch and a walking foot to quilt this part.

Then you just keep quilting across the little hexies from point to point.

This shows the final quilting of the last corners of the little hexagons.

Here is a picture of one trimmed after the quilting.  Now you are ready to stitch on the bottom of the pincushion.

Trim the excess batting from the top of the pincushion.  Using the same method as the linen hexagon top, cut a coordinating bottom for the pincushion.

Stitch a 1/4″ seam all around the hexie leaving an opening for turning on one side.  Trim the corners and turn right side out.

Tuck in the open sides and press.

I stuffed my pincushion with a bunch of batting scraps I had.  You can stuff it with your favorite pincushion filling.  Then just whip stitch the opening closed.

These would make great gifts or be a good project for a sewing group to stitch up together.  Happy Sewing!

This site uses Akismet to reduce spam. Learn how your comment data is processed. 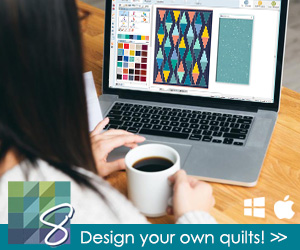 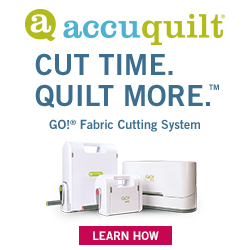 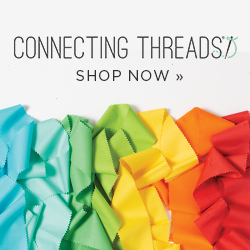 I DESIGN and I TEACH All original content ©2012-2022 by Lori J Miller. All rights reserved.  Please refer to my Terms and Conditions for details.  This site contains Affiliate links.  If you click and purchase, I may receive a small commission.  I only recommend products that I personally use.  Thank you!